to design their perfect chicken house. I was asked to be one of the judges of the entries along with to-be manufacturers of the house, Smiths Sectional Buildings who are based on the Shropshire/Staffordshire border and are known for the range poultry housing, mobile field shelters, horse stables, goat houses and bespoke timber buildings they produce.

Philippa and the crew there made me feel most welcome (the cake was to die for!) as we set about reviewing the designs. In fact it was a bit of an honour for me to be there as I’m the proud owner of a Sherwood 100 bird house  which has served me well (and its previous owner) for the last 20 years, so to see the roots from which it emerged was great.

In fact whilst I’m on the subject of Smiths Sectional Buildings I’d like to say firstly welcome to them as a new sponsor of my blog and secondly that, whilst I can be quite guarded about what I will and won’t recommend I have no issue at all in recommending these guys. They know their poultry housing and ensure the basic needs (which I frequently rant write about) are incorporated. The result is a functional and practical product that in my experience provides two decades and counting of service – not to be sniffed at given the stack ‘em and flog ‘em cheap poultry products that litter the market these days.

Anyway back to the comp. As would be expected there was quite a range of designs submitted but what we were looking for was something that broke the mould a bit, something that would be worth prototyping, something that perhaps we could learn about or pick up new concepts from. The result was certainly conceptual and took quite a bit of construction and design skill to bring together.

Dubbed “the futuristic hen house” or “UFO” (Unusual Feathered Occupancy) I think you’ll agree it’s not like anything seen on the poultry market before.

Designed as a four pen four house ‘high-rise’ its primary purpose in the brief was to provide a way of keeping four groups of bantam fowl for small scale breeding or exhibition stock rearing. 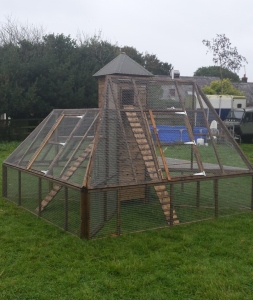 “I love my coop, it’s working really well. At the moment I have a hen and her chicks in the bottom layer. Quail in the highest layer, and the other two have had growers in until earlier this week when I released them to free range.

I love having all the pens so close and organised. And it is great for teaching chicks to use a ramp as you can start them on a low one then gradually move them up…..it is a

brilliant coop that has become invaluable to me this summer. It is quick and easy to clean out and I know the chickens are always safe in it.“

Obviously it was a prototype and head room in the lowest coop is an issue as is the steep nature of the top coop but like any design, it’s a process of reflection and refinement.

Will we see it on mass production? Not yet but who knows, a tweak here and there might just mean we see a few more UFO’s in our countryside.